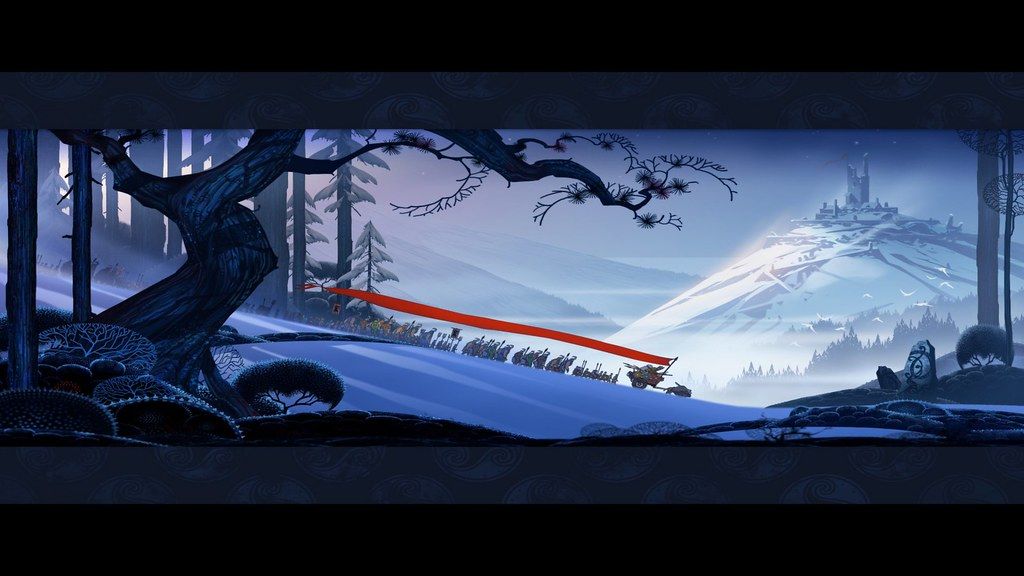 Banner Saga, which came out in 2014, influenced many developers. Some are inspired to make almost clones of the. Others do it more subtly. So, at first Reverie Knights Tactics shares with Banner Saga not too many features. But the further into the story, the thicker the hints.

There are several characters traveling in small groups, tactical battles and communication with the characters in the camps in between these very battles. There are several choices that affect the further events, and a nice stylized image. But unlike Ash of Gods, there is enough of their own solutions.

The plot of the adventure with revenge for the hut burned down by the enemies would have been trivial to the point of horror, but there are nuances. Firstly, it was before our time, when elves built their kingdom with palaces and other extravagances using goblins-slaves. The goblins that survived the purge freaked out, lay low, and a few years later they came and just burned everything down and slaughtered the elves, founding their state on the site of their former greatness. Secondly, the heroine, Aurora, went to rescue her father, whose expedition was to retrieve the ancient knowledge of the elves, but never got around to it.

The creators have not taken a lot of characters — There are only four of them. Aurora — the head of the expedition, a bit of a magician and the only one who can make decisions, her friend Brigantine with a huge shield, elf guide Fren and the avatar of the head of the university who sent the lost expedition, who appears later than everyone else, — a mix of Mysterio and Aang.

Reverie Knights is split into two parts: tactical and conversational. Conversations usually take place in various places, there you can chat with comrades and find right on the screen some useful mushroom. But only in the camp you can order delicious food from the local chef, from the archivist to buy a volume that improves the characteristics, and from the Captain, who brought everyone — Order a couple of bombs from handheld materials. This camp is alone, sometimes you have to go back there. Because elsewhere on the road such excesses are not provided.

Travelling on the map goes from point to point and no days are wasted — This is not Banner Saga, everything is simpler: come to the place, ran into a fight or a chest. Defeated / hacked, move on. Boxes are of two types, some are found at points on the map and are hacked with a mini-game with a picklock, and others stand directly on the battlefield. Well, complete the list of non-combat differences purely quest puzzles encountered in the transition between locations. They toss in a musical tree, or make you collect runes from the rays.. — Looks a little ridiculous and not very appropriate, but it does not happen that often.

Most of the problems are solved by beating foes, as it should be in a game with Tactics in the title. The battles take place in turn-based mode and have long been familiar to all fans of the genre. You can walk around the map and smack with a hold (or use something from the inventory), you can just smack, or you can spend all the action to move farther away. For more variety on the location lying all sorts of items that are recommended to pick up or use to win. With the help of crystals you can restore your health, mana or stamina, and if, for example, to shoot at a special flower, it will shoot everyone in front of you. You can blow up barrels or scatter thorns. In each battle there are additional conditions, if you fulfill them you get more experience and special energy to buy the folio, so after each victory you can replay the battle to get everything. This is not Banner Saga, yes.

On the difficulty for which the game was originally sharpened, the battles very soon gain momentum: heal between battles can only be what the characters pick up on the field or receive as a reward for winning. That can lead to a situation where the entire company is wounded and almost without mana gets into another mess — You have to perform miracles of survival whether you want to or not. Of course, some characters have the ability to heal, it does not help much, plus it eats mana. So the fans of constantly rushing into the thick of the battle with a sword in hand will not be easy. Especially with the bosses.

However, the authors quickly realized that overworked with hardcore, so the game first noticeably rebalanced just before release, and a few days ago also rolled out the patch, turning the base difficulty in Hard, and between it and story-oriented walk adding a new Normal — A variant where mana and lives are replenished after every skirmish, but the battles themselves are still life-threatening.

And yes, even if the enemies are not too diverse, they can ruin your nerves. Even some archer can piss off with his ability to shoot half of the battlefield, and the seemingly simple beginning enemies of the dog-eared type can piss on our heroes and then burn them to the ground. An assassin can easily hop across the area and stab you in the back, and wizards hit in squares, so that sometimes you can't step without getting hit in the head. Blows of the opponents are known by gut feeling, because the information about them is given only after the victory.

Of course, our heroes also have their own answers — Take, for example, the group bashing. You can even get a foursome to kick the crap out of a foe, but then the heroes would be nearby, which would allow any wandering mage to strike at the whole bunch with a lightning bolt. So the battles are fought through gnashing of teeth and constant maneuvering, fans of tactical complexities should enjoy.

Character development is done without a lot of twists and turns. Everyone has three parameters (defense, strength, and dexterity) that can be upgraded as they level up. There are also special skills, combat and support, and instead of clothes from other games, you can give a character up to three folios or useful things that increase parameters. That's pretty much it — not much to go around.

Aurora's election at first doesn't have much of an effect either. Yes, it can be tilted to the side of chaos or order, but in essence it just makes it more bully or quieter. This changes some of the dialogue, but it's the simple choices like «Where to go» or «What to do with a naked elf». Like many other elements in the game, the choice is just there. Doesn't make the game any better, but it doesn't hurt either.

The Brazilians turned out quite a compact game. Nicely drawn and not too rich in elements. Modest plot does not grab the stars from the sky, but also in graphomania does not roll. Battles are harsh enough, but the heart of the game serves for a reason — They're not bad. Reverie Knights Tactics doesn't aim for grandiose plots or a bunch of combat variations, but it's a well-executed relatively modest tactic that doesn't pretend to be more and therefore doesn't fall flat. The golden mean.