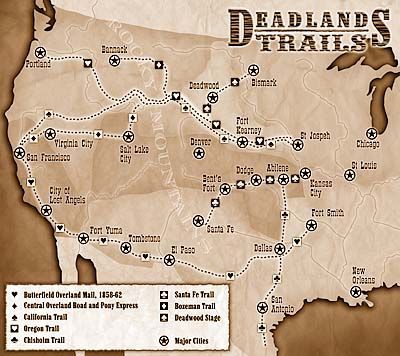 Arriving in yet another deserted city, you see the same sight. The crumbling sign that once welcomed travelers. A large street connecting the few buildings and shops. And the vultures, long ago feasting on what's left of the inhabitants. At this point you thank God that your nose is clogged with road dust and sand. You're not nauseous anymore, but the smell could turn you inside out, no matter how hungry you are. Emotions? Emotions you left long ago in one of your lives. You're just a Passenger in this body, and your journey isn't over yet. At the end there's an epiphany and you'll find your true purpose — Why do you trample this cursed land, where only violence lives and the blood of the guilty and the innocent is shed daily.

Weird West — the work is not as weird, pathetic and confusing as it wants to sound. Protagonist — is not one character, but six, and for five of them the player has to go all the way to the truth. Clive Barker’s Jericho). But don't think that this is a complicated game. Everything here turns out to be much simpler and more logical, and on the way slightly reminiscent of the Kingdom Hearts version of the plot, which was written by adequate people working not for the series, but for one game.

In fact, the basic plot of Weird West isn't even enough for one page of text. The game is not about the story, it's about the stories. Some are written by writers, others are created by the player. «The immersive sim» in all its glory — you're free to choose the direction of the story engine.

So, you find yourself in the setting of the very Weird Wild West. It's got it all: werewolves, witches, prophecies, sirens, magic, bloody rituals, mutants, talking trees and, uh, pagers. To appreciate the whole story, you need to take turns to be in the skin of several colorful characters, each of which has a certain status in society and skills. You can follow the story, of course, but you can also explore the world. Not that there's much to do in the game, but there is plenty to do. For example, you can walk up to a sign «Bounty hunting» and turning in criminals, dead or alive. If you kill innocents, your face is bound to be on that board, so try to stay out of the way.

However, to go to the trouble is much more interesting, because then you can see how the game will react to your actions. You can kill everyone and everything, you can even turn a whole town into a graveyard, and then monsters or bandits will move in. You can turn in your friends, execute your partners, and just act like a literal end-of-the-world monster. And the game takes it all into account, giving the player the opportunity to turn the Weird West into the center of the coming Apocalypse.

But to make sure that doesn't happen, Weird West has a peculiar system «Nemesis». The more atrocities a hero does, the lower his reputation and the more bounty hunters will want to come after his soul. And if someone, whether a bandit or a hunter, escapes from a gunfight, they'll want to come back one day to avenge their friends and commanders. Of course, there are flaws in the system, for example, sometimes these characters take revenge for the wrong thing that the player. But it's a matter of patches.

Other problems are unlikely to be corrected in any way, shape, or form. The same locations here are pretty much everywhere. And not that they'll be big, some «dungee» In general, a couple of rooms, but also recurring. This is not notice when you flip through the story, but it is worth it to start «amuse yourself» Traveling through a world designed along the lines of the first two Fallouts, as the magic dissipates and budget starts creeping in from everywhere. And yes, the game is really inexpensive. It tries to be diverse in another way — In the walkthrough style. For example, the door of any house can open with a stolen key, you can hack with a picklock, you can blow, and you can just ignore it and get inside through a window or chimney (this requires pumping jump to jump a couple of meters up, or use carried anywhere drawers).

The choices in the dialogues and in the main story do a pretty good job of transforming the world. You can stop wars, add intelligence to mindless creatures, make peace with people who should never have been friends. On top of that, the characters you left behind, if you don't kill them with your decisions, will continue to live in the world, and they can be recruited into your squad. They have, these «worked out» heroes, there will even be a kind of epilogue in the story. Like a bounty hunter. She goes after the men who stole her husband and killed her son. She saves her husband, but she doesn't get her revenge on the man responsible for the kidnapping. However, the next character will be able to find a couple of new head orders on the message board, including a contract for a villainous kidnapper. There's exactly one downside — The previous character who was optionally on the team won't comment on it at all. Too bad, something like that would have made the journey even more fulfilling. Also, it is not quite clear why, without any particular reason, these partners can simply refuse to go further with the player and never join a group of.

Now let's talk about the other mechanics of the game. It's got a lot of internal physics. Any heavy collision with an item does damage to both the item and the person pushing. Because of this, there may be some difficulties. Jumped through a closed window — The homeowner will run to complain to the sheriff that you messed up his house. You do a somersault in the doorway when someone comes in — The sheriff's gonna wonder why you're hurting civilians. But the physics can work for you as well. If the weather generator created rain, there would be puddles in all the low-lying areas of the terrain. Any enemy who walks through them will get the effect «Wet» and become vulnerable to electricity. If he goes through the oil, he's gonna be vulnerable to fire. If you walk on acid — Well, he's a fool himself, so save the acid-burned fool from a life of torment.

However, the funniest part of the in-game mechanics is in dealing with the ghosts that open up on the third character. Everyone, whether it's a named NPC or just an extra, can become a ghost after death. If there is a ghost, it means that the dead person has an unclosed gestalt, and the player can help him with that. The quests are randomly generated, but it's funny how a random bandit you shot in battle can ask for help. Put a bullet in his forehead — Get a quest from him. It's so absurd it's very blackly funny.

So «entertain yourself», As it is fashionable now, there's more than that. I wish they'd put nonlethal weapons on this board to add more variety to the stealth game. But what do you want from a game that is already out of code, so that every gamer enjoys his story?. She doesn't have a lot of competition in this one.